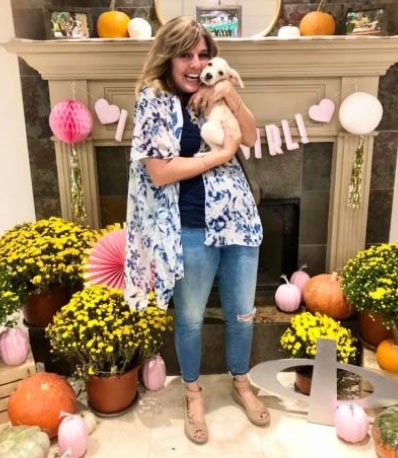 Franco’s Mandeville is happy to have played a part in this heart-warming story of a pet finding a new home across the country thanks to Cajun Tails and Lori Wietfeld, who describes it all below.

After having to say good bye to my 18 year old BFF Maggie (Black doxie), I resigned myself to never having another dog again, pretty much closing my heart and mind to the idea all together. Fast forward a year and two cats later, I was at a family reunion where I got to spend some time with my cousin’s dog, Mia, A small, wired haired doxie. My heart melted and I was reminded how much I missed having a little friend around in the form of a dog, so on that following Monday I started my search!

I started looking on Petfinders.com and searched available dogs (small, black, terrier mixed, female) three times a day in my immediate area with little success. Then I began to broaden my search to include any dog within 500 miles and then eventually to ANYWHERE. (PLEASE LET ME FIND A DOG!) I decided to look at any dog, any color, any sex, young or puppy. I completed no less than 5 adoption applications within three days only to be turned away due to the dog not being available, another family was picked over us or they didn’t adopt out of state. I really began to lose heart about the entire thing and summed it up as a message that I wasn’t meant to get another dog. So I just prayed! I prayed that if I was meant to have a dog that the Lord would get him or her to me. I also prayed the this dog would be everything I really wanted deep down regardless of sex, size, color and location.

I had seen Twizzler’s photo on Petfinder.com and saved her to my favorites, but had completely convinced myself that there would be no way they would ever think about adopting to me being that she was in New Orleans and I was in Ohio. Heck, rescue’s in New York wouldn’t even talk to me. I searched for an hour more that day until I finally just said, “what the heck” and sent an adoption application to Cajun Tails. I decided to plead with Cajun Tails in an email to just LOOK at our application and to consider us for Twizzler, that I would do anything necessary to prove we were Twizzler’s family regardless of the distance. To my HUGE surprise, Courtney responded almost immediately that Twizzler was still available and she was interested in talking to me!

We exchanged emails that night and then talked on the phone the next day. Courtney explained that Twizzler had butterfly scoliosis and even though she checked out fine, it was something to be aware of. That’s when I also learned that Twizzler and her other siblings had been in a kill shelter and 1 day away from being euthanized. As I understand it, Cajun Tails Rescue workers were lucky to be able to even get these puppies out of the shelter.

After we talked for awhile, Courtney asked if I would be willing to do a virtual home visit. I was beyond thrilled and said yes right away. Within 30 minutes we were on FaceTime walking around the yard area and answering questions. Courtney was so nice and so genuine during the entire process. She never once made the distance an issue. Cajun Tails was much more concerned that this little puppy was going to be with the right family. I’m sure my neighbors heard the joy swell up out of me when Courtney told me that she had no concerns at all in approving us to adopt Twizzler!!!

The next step was getting connected to Twizzler’s foster mom, Daisey so we could work out all of the details. It wasn’t long before Daisey and I were texting back and forth exchanging information and photos of that sweet little dog. I made all of the travel arrangements that day and was set to fly down to New Orleans on a Wednesday. Everything worked out so smoothly and fell into place exactly like I had prayed. Friends couldn’t believe that I was flying from Pittsburgh to New Orleans in one day to adopt a dog. I never thought twice about it to be honest. I did ask my husband on the the way to the airport if he thought I was crazy. He just smiled and said, “Absolutely, thank goodness!”.

I wasn’t expecting to see so many people gathered around Twizzler the morning I (FINALLY) arrived at Franco’s to pick up the puppy. It was such a sweet thing to see and then to realize it was all for this sweet little dog that almost didn’t get a chance. My heart was completely full at that moment when I got to see her and hold her myself. I was overwhelmed from all of the well wishers and and the people that were genuinely happy and involved with Twizzlers journey. This little dog with the curved spine brought so much love and joy to so many people. I was just so taken by that and so happy that I WAS PICKED TO BE HER FUR MOM!!! What a blessing.

I can’t thank Cajun Tails Rescue, Daisey, her family and the Franco’s team for being truly wonderful people to each other, to me and to Ruthie Roux. The work you are all doing to bring attention to the animals in the rescue while adding a social benefit to your clients, young and old, is amazing. It never felt like Ruthie Roux was just a stray dog needing a home quick when I was working with Cajun Tails. Other rescue could learn alot from your team!

Ruthie Roux is already living a full life! She makes friends wherever she goes. I told Daisey that there is just something very special about Ruthie Roux. I believe she is an old soul that is here to teach us all something. I plan to pay attention!

Thank you for everything,
Lori Wietfeld and Family